A BRIEF HISTORY OF NIEU-BETHESDA

Nieu-Bethesda was founded in 1878 when the farmers of the area negotiated with the Church in Graaff-Reinet to have a Dutch Reformed Church of their own since the nearest church in Graaff-Reinet was eight hours away. The building was completed in 1905. The village came into being on the farm Uitkyk, which was originally the farm of B.J. Pienaar. Uitkyk (or Look Out) was the name since in the early years the owners had to be on the look-out for hostile bushmen and predators. The restored Uitkyk farmhouse can still be seen on the ‘West Bank’.

In the first thirty years Nieu-Bethesda grew and flourished. The school in Martin Street, where the sports complex is today, had over 200 children, among them James Kitching and Helen Martins. The Nieu-Bethesda Trading Company could provide the local people with nearly everything: fresh dates, cheese, even suits from London.  There were a blacksmith, a garage, a leather shop and of course a resident minister for the N.G. Kerk.

In the thirties Nieu-Bethesda started to decline: the depression had an effect, travelling had become easier and children were sent to boarding schools – Volkskool or Union High or the convent in Graaff-Reinet or further away. This decline continued while Helen Martins started creating her ‘Mecca’ in 1945 and carrying on for about 20 years.

Athol Fugard had bought a property in the village in 1970. He was famous as a playwright already and when he wrote The Road to Mecca (a play based on Helen Martins) in 1985, visitors from everywhere started looking for the Owl House. Visitors kept coming and Neil Sheard saw a need and bought the house where The Village Inn is today to start the first eating place in Nieu-Bethesda. The Village Inn opened in November 1991 and was the first and only coffee shop and restaurant to cater to the needs of tourists for about ten years. Neil’s brother-in-law, Egbert Gerryts, was the first host and manager and became well known as the friend of many patrons.

In 2005 another attraction, the James Kitching Fossil Exploration Centre (JKFEC) opened its doors. James Kitching grew up in Nieu-Bethesda and having completed grade 10 in the local school, he became a world renowned paleonthologist. The Centre provides well trained guides to give visitors a glimpse of what this part of the Karoo was like about 250 million years ago.

The Owl House and JKFEC form the nucleus of the Heritage Centre of Nieu-Bethesda. 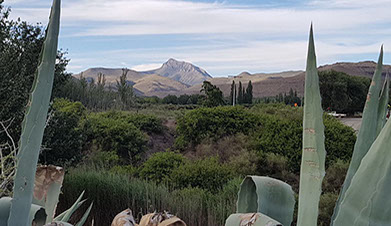 “History will be kind to me for I intend to write it.”

Bruno’s at The Bethesda

​+ Bruno’s at The Bethesda